We in Farmington have always prided ourselves on being a neighborhood community. So when we talk of progress, we owe it to ourselves to make sure that all our residents—across the city—are included in that vision.

I’ve spent the summer in the neighborhoods, knocking on doors and listening to people’s ideas and issues. And while there’s widespread love for our historic downtown all across Farmington, many folks in the outlying neighborhoods feel like they’ve been forgotten in the rush to bring in mega-developments downtown. 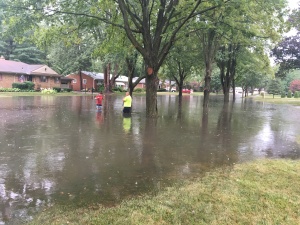 Maybe their streets flood, like Mayfield (at left) does every year because the drains are outdated. Or trees are old and need attention. Or there aren’t any convenient crosswalks to connect these citizens with the rest of the city.

This doesn’t sit well with me. And it’s because I’m thinking with a different mindset than many of our current city leaders. Instead of pouring money into building new supersized housing complexes downtown, I’d rather invest in improving our neighborhoods.

Several of our current council members like to say that in order to survive, Farmington needs not only one, but maybe two or three giant developments downtown. They say that unless we put them in right away, property taxes will go up for everyone in the city.

That’s a scare tactic, because new development is NOT the only way to generate funding for the city. The other approach is making a number of investments in our neighborhoods: investments that, while smaller individually, generate just as much or more revenue when totaled up. 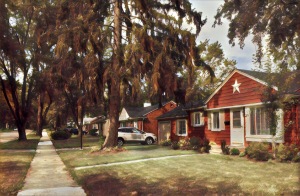 Here’s an example: If the city, instead of pouring money into “land-banking” (i.e. buying buildings to tear down for redevelopment) were to put funds into improvements to the Floral Park subdivision on the east side of town, that neighborhood would become more desirable, and property values would increase. And since there are 300 houses in that sub, it wouldn’t take a huge jump in property values for the city to see more tax revenue being generated—without having to cram new development into the downtown.

It’s a bottom-up, not top-down, approach. It means going out and talking to people about what the city could do better for them. It means asking for feedback about the kinds of development and the kind of changes changes that people do want to see. Maybe forming new citizen committees to solicit ideas and make recommendations. 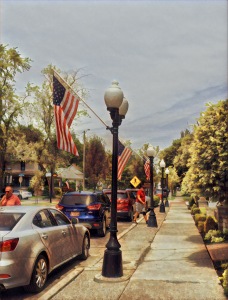 Taking an approach like this would increase our tax base.

It would remedy the urge to sacrifice our downtown in favor of the proverbial bottom line.

And, perhaps most importantly, it would improve quality of life for the citizens who have chosen to call Farmington home.